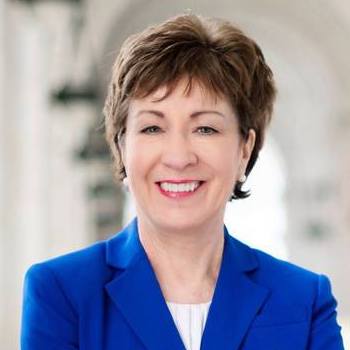 First elected in 1996, Senator Collins has earned a national reputation as an effective legislator who works across party lines to seek consensus on our nation’s most important issues. For the past seven consecutive years, Senator Collins has ranked as the most bipartisan member of the U.S. Senate by the Lugar Center and Georgetown University.

Senator Collins ranks eleventh in Senate seniority and is the most senior Republican woman.  She chairs the Senate Aging Committee and the Transportation, Housing, and Urban Development Appropriations Subcommittee.  She also serves on the Intelligence Committee as well as the Health, Education, Labor and Pensions Committee. Known for her Maine work ethic, Senator Collins has cast more than 7,500 consecutive votes and holds the longest perfect voting record in the history of the U.S. Senate.

Senator Collins was born and raised in Caribou, Maine, where her family runs a sixth-generation lumber business.  She is married to Thomas A. Daffron and resides in Bangor, Maine.