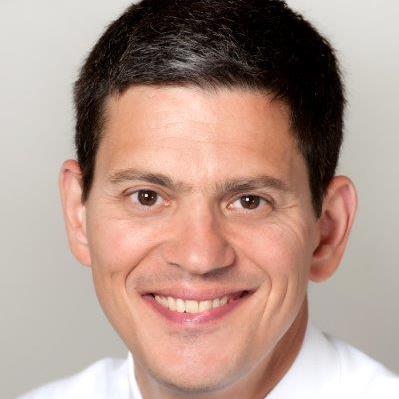 David Miliband is the President and CEO of the International Rescue Committee. He oversees the agency’s relief and development operations in over 30 countries, its refugee resettlement and assistance programs throughout the United States and the IRC’s advocacy efforts in Washington and other capitals on behalf of the world’s most vulnerable people.

David has had a distinguished political career in the United Kingdom. From 2007 to 2010, he served as the youngest Foreign Secretary in three decades, driving advancements in human rights and representing the United Kingdom throughout the world. His accomplishments have earned him a reputation, in former President Bill Clinton's words, as "one of the ablest, most creative public servants of our time.” In 2016 David was named one of the World’s Greatest Leaders by Fortune Magazine and in 2018 he was inducted into the American Academy of Arts and Sciences.

David is also the author of the book, Rescue: Refugees and the Political Crisis of Our Time. As the son of refugees, David brings a personal commitment to the IRC's work and to the premise of the book: that we can rescue the dignity and hopes of refugees and displaced people. And if we help them, in the process we will rescue our own values.