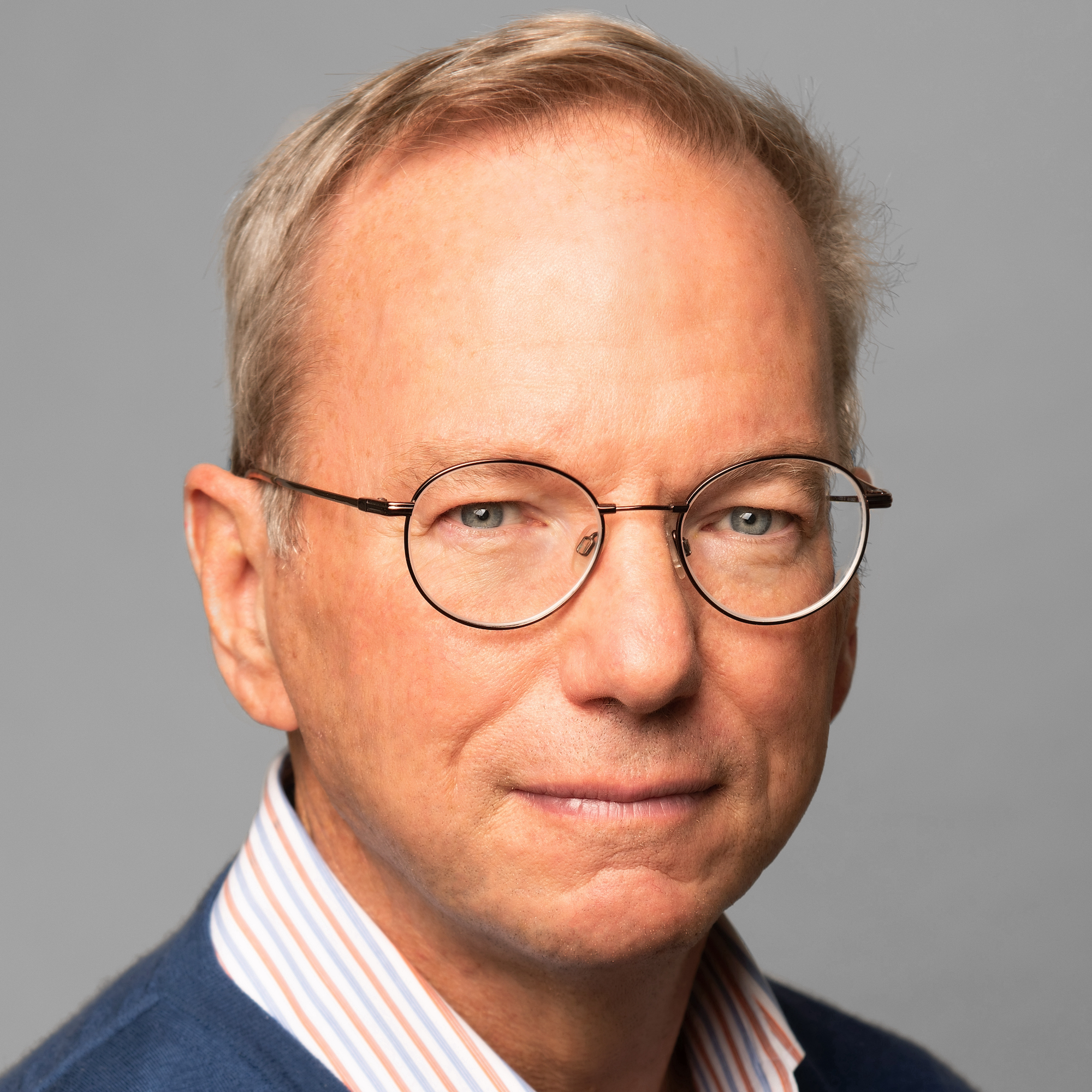 Eric Schmidt is an accomplished technologist, entrepreneur and philanthropist. As Google’s Chief Executive Officer, he pioneered Google’s transformation from a Silicon Valley startup to a global leader in technology. He served as Google’s Chief Executive Officer and Chairman from 2001-2011, Executive Chairman from 2011-2018 and most recently as Technical Advisor from 2018-2020. Under his leadership Google dramatically scaled its infrastructure and diversified its product offerings while maintaining a strong culture of innovation. Prior to his career at Google, Eric held leadership roles at Novell and Sun Microsystems, Inc.

Eric has received numerous accolades and supports a variety of esteemed organizations. He was a member of the President’s Council of Advisors on Science and Technology and served as the founding Chairman of the Department of Defense’s Innovation Board for four years in which he was awarded the Medal for Distinguished Public Service by Secretary of Defense Ashton Carter. He was also a member of NASA’s National Space Council User Advisory Group for two years which was chaired by the Vice President. He currently serves on the boards of The Broad Institute, The Mayo Clinic, on the Advisory Board at UC Berkeley, and is a member of the Cornell Tech Board of Overseers. He is currently the Chairman of the US National Security Commission for Artificial Intelligence.

An accomplished author, he has co-authored three New York Times best sellers, The New Digital Age, How Google Works, Trillion Dollar Coach. He is a Gulfstream pilot, and his philanthropic efforts through The Schmidt Family Foundation and Schmidt Ocean Institute focus on climate change, including the support of ocean and marine life studies at sea, as well as education and cutting-edge research and technology in the natural sciences and engineering space.

Inspired to continue to give back, he co-founded Schmidt Futures in 2017, which bets early on exceptional people making the world better, applying science and technology thoughtfully and bringing people together across fields.

In 2019, Eric and his wife Wendy announced a new $1 billion philanthropic commitment to identify and support talent across disciplines and around the globe. As part of this effort, Schmidt Futures, in partnership with the Rhodes Trust, launched Rise, the anchor initiative focused on increasing opportunity for extraordinary young people worldwide and empowering them to serve their communities. Most recently, Eric and Schmidt Futures were selected by New York Governor Andrew Cuomo to lead the state’s 16-member Blue Ribbon Commission, which will employ lessons learned from the COVID-19 pandemic to improve and modernize state systems for the future.

In August 2020, Eric launched a podcast, “Reimagine with Eric Schmidt,” a podcast series of conversations with leaders in government, business, science, and technology to explore how society can solve current challenges and build a brighter future after the global coronavirus pandemic.

Eric holds a bachelor’s degree in electrical engineering from Princeton University as well as a master’s degree and Ph.D. in computer science from the University of California, Berkeley.

Dr. Eric Schmidt, Co-Founder of Schmidt Futures, Chair of the Commission to Reimagine New York on COVID-19, and former Google CEO, discusses how we can and must build back better.